Most Scottish place-names are descriptive, but not all are literal. Something we’ve become very aware of through the REELS project is the large number of metaphorical place-names in our study area. Eccles parish is not unusual in containing at least a dozen, including Caldron Pool, Cocked Hat Cover, The Kaims (‘combs’), Puncheon Bridge (apparently named from a resemblance to a puncheon, i.e. pointed tool), and Ship End – explained in the Ordnance Survey Name Book as “a breakwater faced with wood, and said to resemble the stern of a ship”.

Metaphor is prevalent in ordinary language as well as in place-names, and a freely available online resource now makes it possible to trace all metaphorical connections between semantic fields throughout the history of English. The resource comprises a pair of online Metaphor Maps, produced by the AHRC-funded project “Mapping Metaphor with the Historical Thesaurus” (PI Wendy Anderson) at the University of Glasgow. The Metaphor Map of Old English http://mappingmetaphor.arts.gla.ac.uk/old-english/ covers the Anglo-Saxon period, while the Metaphor Map of English http://mappingmetaphor.arts.gla.ac.uk/ covers the period from Middle English up to the present day. Each Map divides the semantic space of English into three main parts: the External World (green), the Mental World (blue) and the Social World (red). These in turn are divided into sub-sections and categories, with links between them representing metaphorical connections. 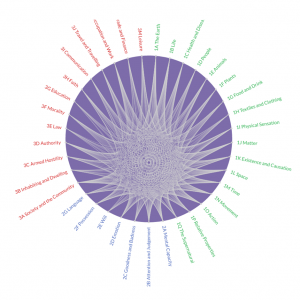 Using this interactive resource, we can establish that caldron forms part of a wider network of words for containers applied to landscape, which also includes basin, bowl, kettle, pot, trough and others, and is evidenced as far back as Old English (e.g. OE byden). Other metaphors occur mainly or exclusively in place-names, although – like Cocked Hat Cover, The Kaims, Puncheon Bridge and Ship End – many are motivated by shape, one of the most productive sources of metaphor in both Old and later English.

The REELS team uses maps extensively: mostly historical maps, either printed or online. The Metaphor Maps are a very different kind of map, and they add a new dimension to the study of language.