Edin’s Hall ‘(Fort & Broch)’ is a remarkable monument situated on the north-east slope of Cockburn Hill above the Whiteadder Water. Possibly dating from the Roman Iron Age (Canmore website), the interpretation both of the site itself and of its name is problematic. I will leave to the archaeologists the arguments as to what its original purpose was, when and for whom it was built and whether or not it is a broch as opposed to a ‘complex Atlantic roundhouse’ (see NMRS Canmore ID 58777). As to the name, our earliest record is from Armstrong’s map of 1771, when it appears as Wooden’s Hall or Castle. Here Wooden has nothing to do with the adjective ‘wooden’ – Edin’s Hall is entirely of stone. Rather it is a form of the Old English god Wōden, the god of wisdom and poetry who appears in the Norse pantheon as Odin. Clearly it was thought that only a god could have built such an impressive and unusual structure.

However, by the 1790s the name Wooden’s Hall was falling out of fashion. We know this because the minister of Duns, Rev. Dr Robert Bowmaker, writes in the Old Statistical Account: ‘by some called Wooden’s hall, but commonly called Edin’s or Edwin’s hall’. In this way he associates it with the famous king, Edwin, 616-32 AD, the first Christian king of the Northumbrians according to the early eighth-century scholar Bede. By the twelfth century it was generally thought that Edinburgh itself took its name from him, being originally *Edwinsburgh. This idea still persists to this day, but Edinburgh originally meant ‘fortification (Old English burh) associated with an area or province called Eiddyn’, Eiddyn itself being a Brittonic (Old Welsh) name of unknown meaning. It is perhaps no coincidence that the Rev. Dr Bowmaker preferred the name associating the fort in his parish with a great Christian king than with a pagan deity! So in this name we have several layers of re-interpretation.

The use of the element hall is also noteworthy. Originally hall meant ‘a high-status dwelling such as a big hoose or castle’, but later (i.e. from about the 17th century onwards), it was often applied ironically, with humorous effect, combined with elements describing poor land, such as whinny ‘associated with whin or gorse’, or bog; also vegetables, such as cabbage or sybie (spring onion), or birds, such as laverock or lark, or corbie (crow). Examples of this can be found in Berwickshire in names such as Partanhall (Ayton parish), containing Scots partan ‘an edible crab’ or Cloverhall (Eccles parish). In the name Wooden’s Hall, later Edin’s Hall, given that it has been a ruin for many centuries, albeit an impressive one, it is difficult to know just how hall was being applied, whether or not tongue in cheek. 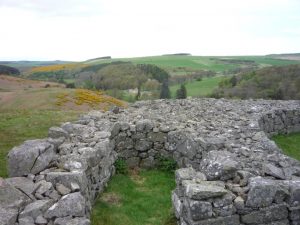